Today I'd like to break down for you my process in developing some of the recent 3D Background Art for GraveKeeper Academy, in hopes it might inspire you to consider making 3D backgrounds for your project! 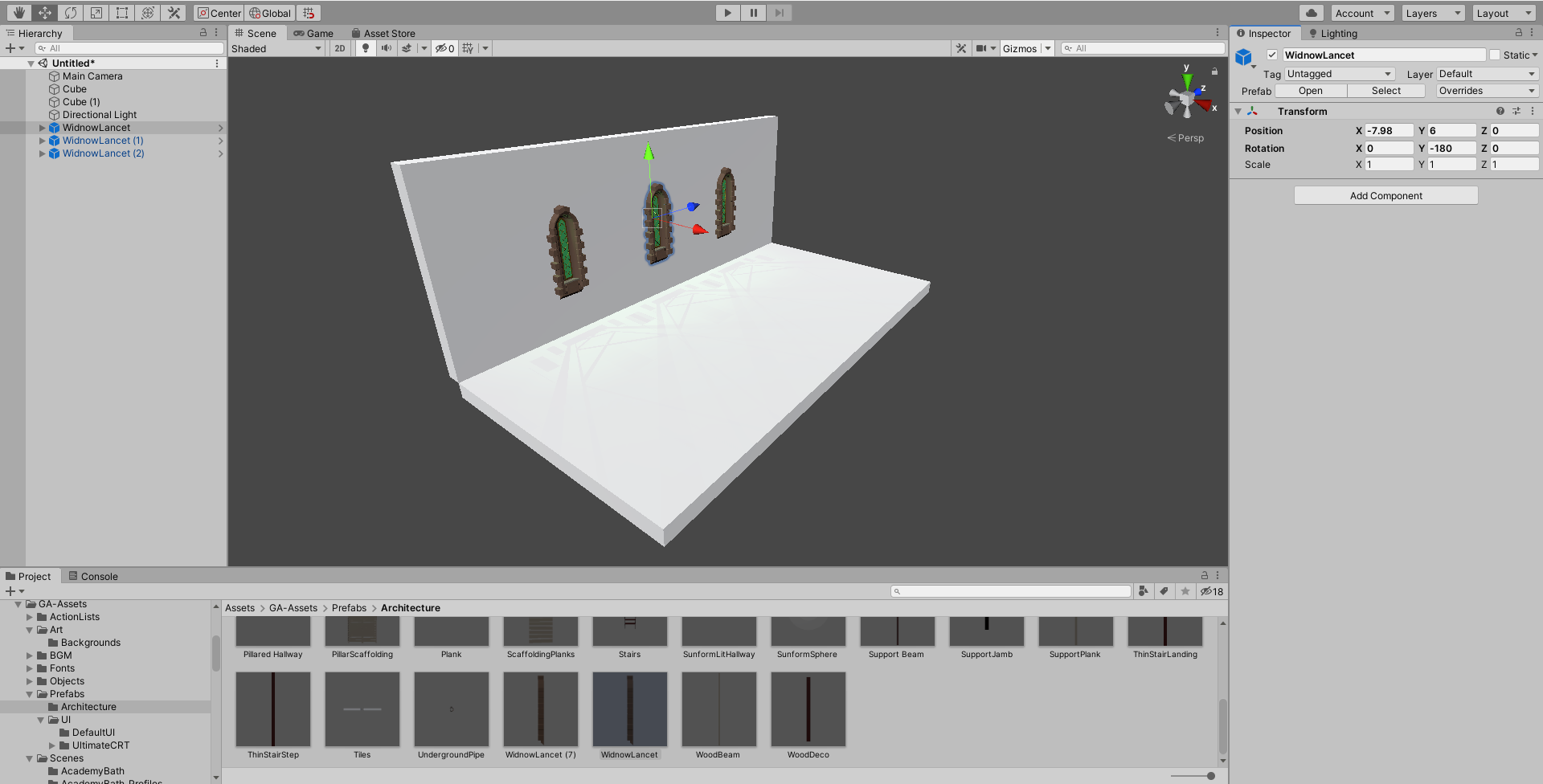 So the first thing I sit down and do is what's called 'white boxing'. In my teens I trained hard to learn how to design levels with the primitive tools of the trade available to the public of my time. I had a lot less freedom then -- but even then I was whiteboxing. The guiding principle of a white box is pretty solid:

" If the level looks good when there's no textures or lighting or props, it'll look great with textures and lighting and props "

And it's usually true! Now, bad textures and poor lighting can make a good thing bad but there's also a hidden bonus to working with whiteboxes: you can easily throw what you don't like away. "It's not textured, it's not lit, and I don't want it. Deleted."

White-boxing lets you very quickly develop stuff for your games. I don't have the time to really texture anything, even my models, for GraveKeeper Academy, so whiteboxing is really helpful for me. I hope it'll be helpful for you too! Resist the urge to add materials to everything. Instead, if you're using Unity: Make Everything Prefabs.

Why? Because if you make a Wall Prefab for your scene and you want to change all the walls in your scene, you'll have to go hunting down and clicking and editing each and every one of them. With a Prefab, you just hit the right arrow on it in the Hierarchy view, change the Material, and hit Save if Auto Save isn't on. Bam! All the walls now have a material assigned.

I recommend white-boxing, also, while you're starting out because what you might originally think of building might not wind up being what you ultimately want to build later -- as I found out with this classroom! Follow my process here as we move along.

First things first: I wanted to build a unique roof for the classroom because a solid block would be boring. The Aeston GrandTomb has tons-of-money thanks to it training up nobles and the like, so it should look the part! A curved, braced, ceiling was a must. If I was any better at 3D Modeling, I'd probably put a few statues and gargoyles up there too!

I make all my non-block assets in Blender. Check it out if you haven't, Unity can natively import Blender files, which makes everything faster!

Alright, sweet. I had to flip my vertex normals because I accidentally built the model 'backwards', but it came out alright.

Still doesn't quite fit right, so I fiddled with the scale modifiers and the position coordinates until it looked pretty good. 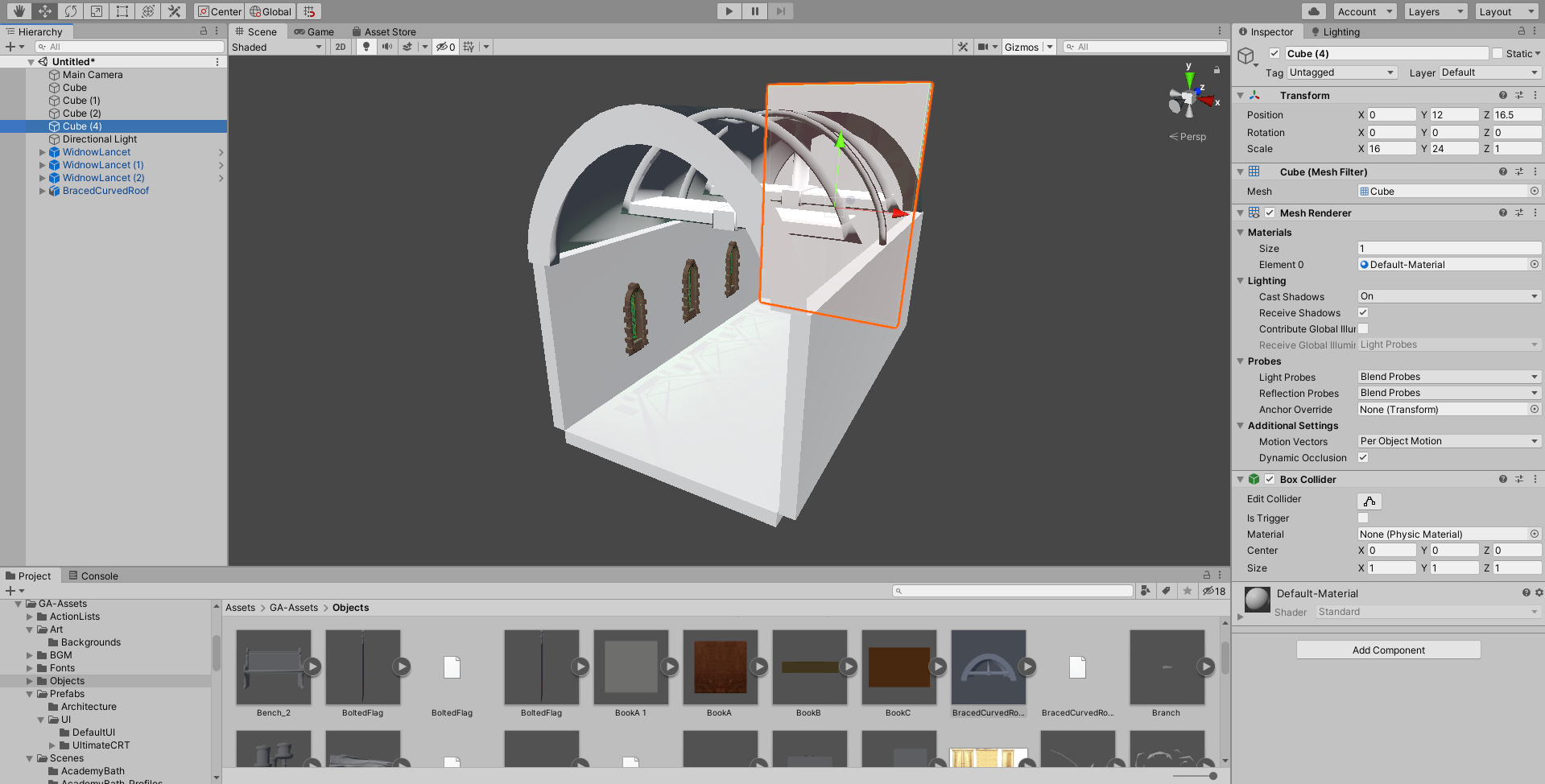 "Time to start working on lights because I like my scene, so let's build the rest of the walls!" ... or so I thought. 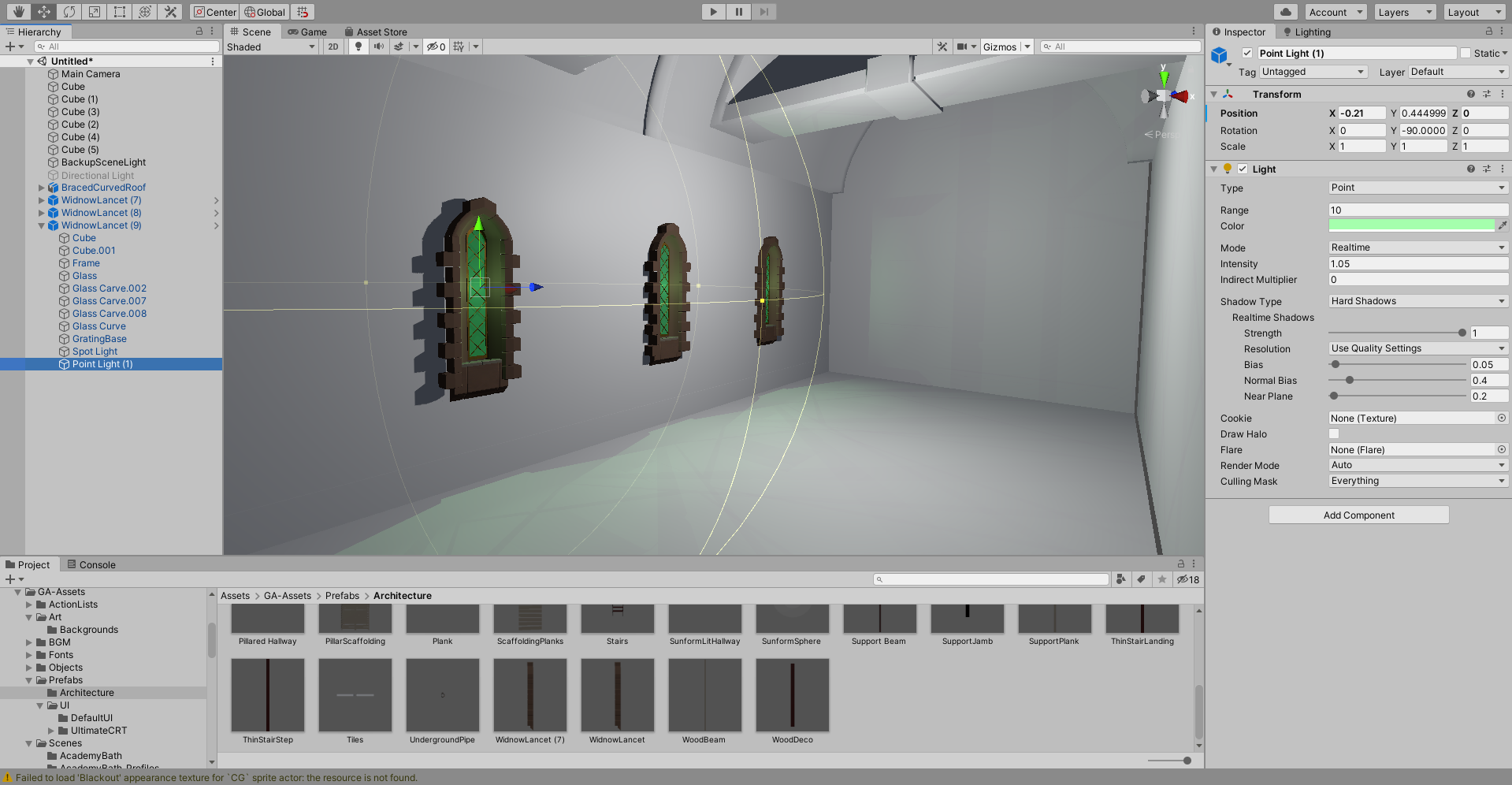 "Great. The lights need to be adjusted forward so that we don't get those weird shadows on the floor but otherwise it's looking go--"

I noticed about then that the room felt 'cramped'. Looking at it for a moment, I realized I'd made it too small width-wise for it to have any real 'breathing room' between desks and the like. For a poorer classroom that might be fine -- but Aeston is Opulence! Op-u-lence!!

So I decided to make the room larger. It's a whitebox and I hadn't done anything complex with it yet, so that was easy to do! 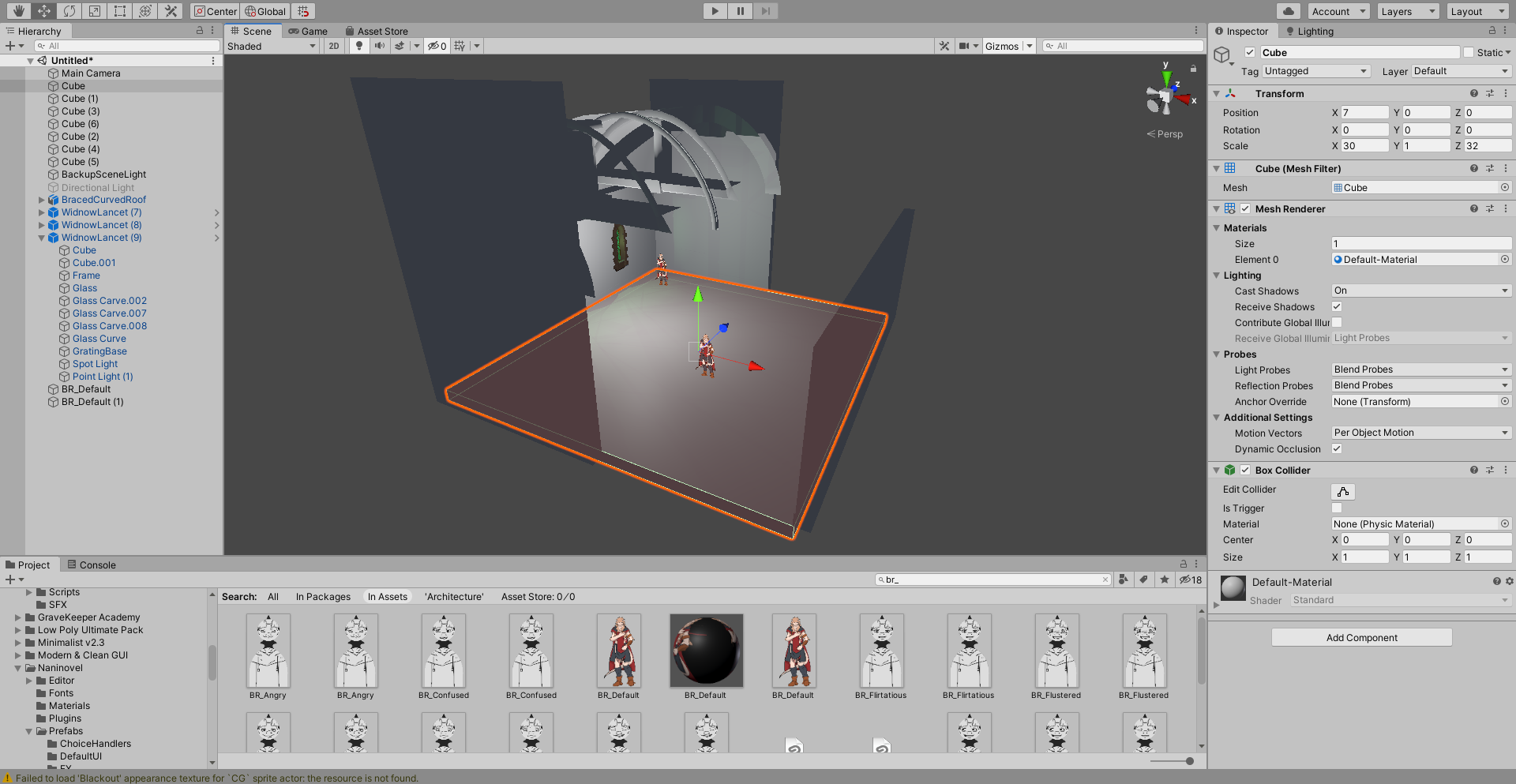 And here's why it felt cramped and I didn't notice until I started putting up walls. Always put a 'scale reference' in to your scene when you're white-boxing. Inconsistent scales for walls and roofs and such can lead you to scratch your head while you're looking at the scene as you go 'well, it looks wrong, but I can't tell why or how...'

So I made Bran serve as my scale reference.

You know... because he's a lizard.

It's a scale reference.

... and this is why I didn't become a comedian. But I did start getting OK at level design and lighting! 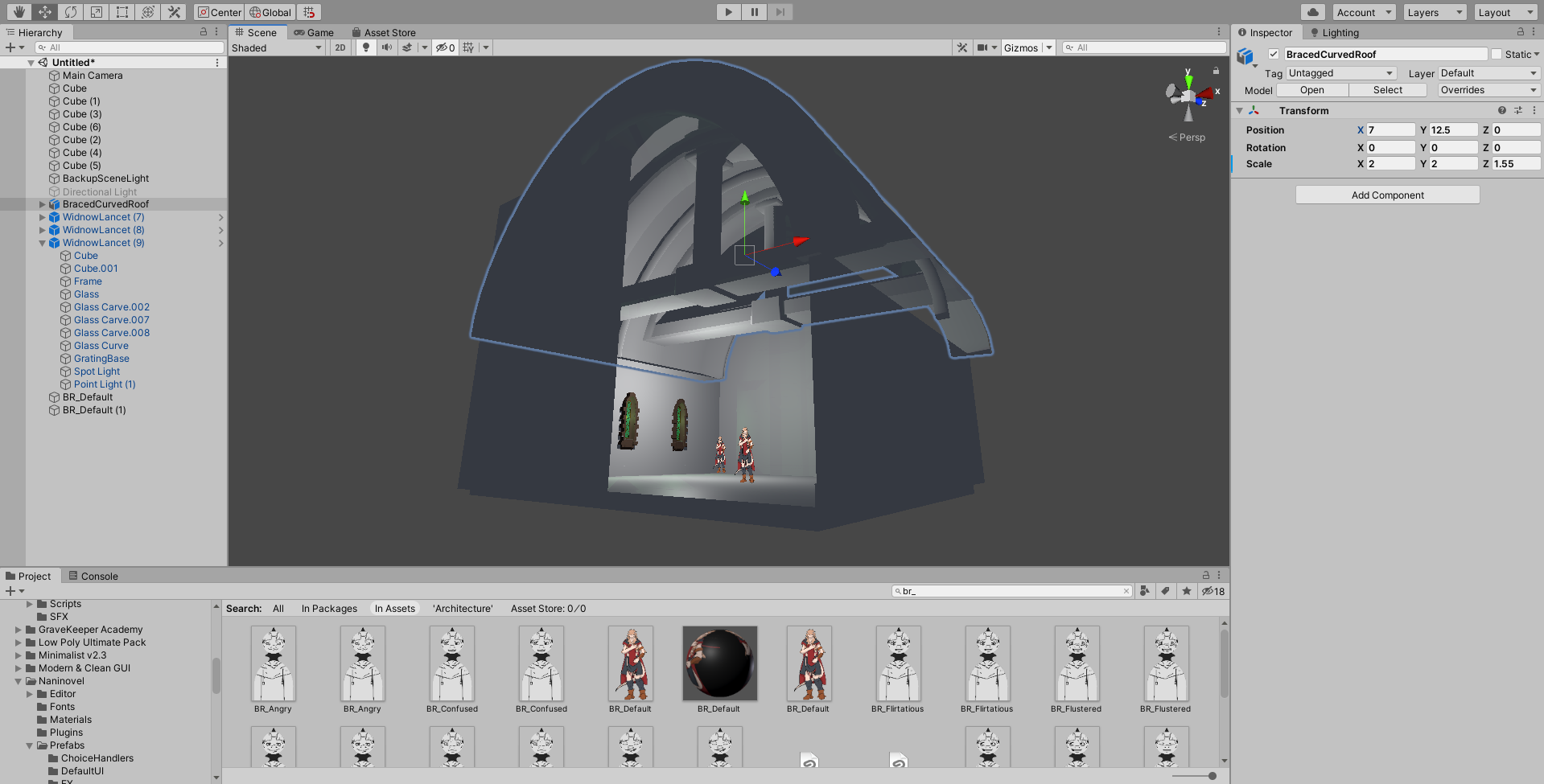 OK, and we're fixed! Roof's about the right size, the room feels roomy. I could imagine someone taking about 3 seconds to walk from one wall to the other so it feels roomy. (This is my 'three second rule'. For me, when I walk around in a room if I can walk forward without having to change what direction I'm going for more than 3 seconds, it's a roomy-room)

I also enabled my Post Process Effects volume and PP Layer on the camera, using one of the profiles I've built to set up the soft shadowing and color adjustments. Setting up your PostProcess stuffs can save you a lot of time of manual painting in your favorite art program. In my case, I fiddle with it enough that I don't even need to boot Clip Studio Paint except to make text assets and decals! Let's slap ourselves into our 'game view'.

So, after you've finished up your WhiteBox, it's Texture and Light Time!

Most of my scene is boxes, so I use textures on those surfaces. The stuff that isn't I use materials on to shade, with some rare exceptions (e.g. the kickplate at the bottom of the stone walls, which I'm using not only to 'smooth out' my floor-to-wall transition but also hide my corners a bit, which you'll see in upcoming pictures)

Now lights are a fickle mistress, but I use Photography principles to help me lay both them and my scenes out. If you're making a 3D scene by yourself: learn how to light a photograph/scene. It's invaluable stuff and will really kick your art from 'ok' to 'woah' in a hurry once you really grasp the fundaments.

Now I won't give a full lesson here on lighting principles (it'd take a while) but I can give you stuff to search for. The technique I use is called the 'Three-point Lighting' Method in conjunction with the 'Rule of Thirds' and the 'Golden Spiral' concepts which I use mentally to help lay my scenes out. Check those out if you haven't heard of them, they're super handy and can be that 'little kick of magic' you've been looking for! ("Three-point Lighting Method", "Golden Spiral in Photography", "Rule of Thirds Photography")

Anyway, you might notice that the scene looks very 'blah' right now. White lights are blah lights. Don't use white lights unless you need a very medically sterile scene. It's the same principle for darkness: don't let anything hit actual black. "So why are you using white lights, dummy?" I'll tell ya:

Yeah, that's right. I'm WhiteBoxing with my lights. It's a concept! There's no WhiteBox Method Police to stop me from adapting it to everything! So, yeah, I use white lights to set up how light or dark the scene will be because they're my 'maximums': in other words, I've made it so that I can set up 'the ceiling brightness for the scene'. You, of course, can feel free to use colored lights at your leisure but a word of caution:

It is easier to add sugar and spice than to remove it or compensate for it.

Once you start making the assumption 'OK, my scene is going to have this huge blue light' and you start slapping down materials you might arrive at this weird murky dark/color mushy-weirdness. It happens to me a lot which is why I've started using white lights instead of colored lights to lay stuff out. Anyway, maybe you're better at Color Theory than I am in which case: go hog nuts! All of these things are guidelines and how I approach stuff. Feel free to experiment!

Anywho, now we've got our base scene set up, it's time for Props. It's Prop Time. 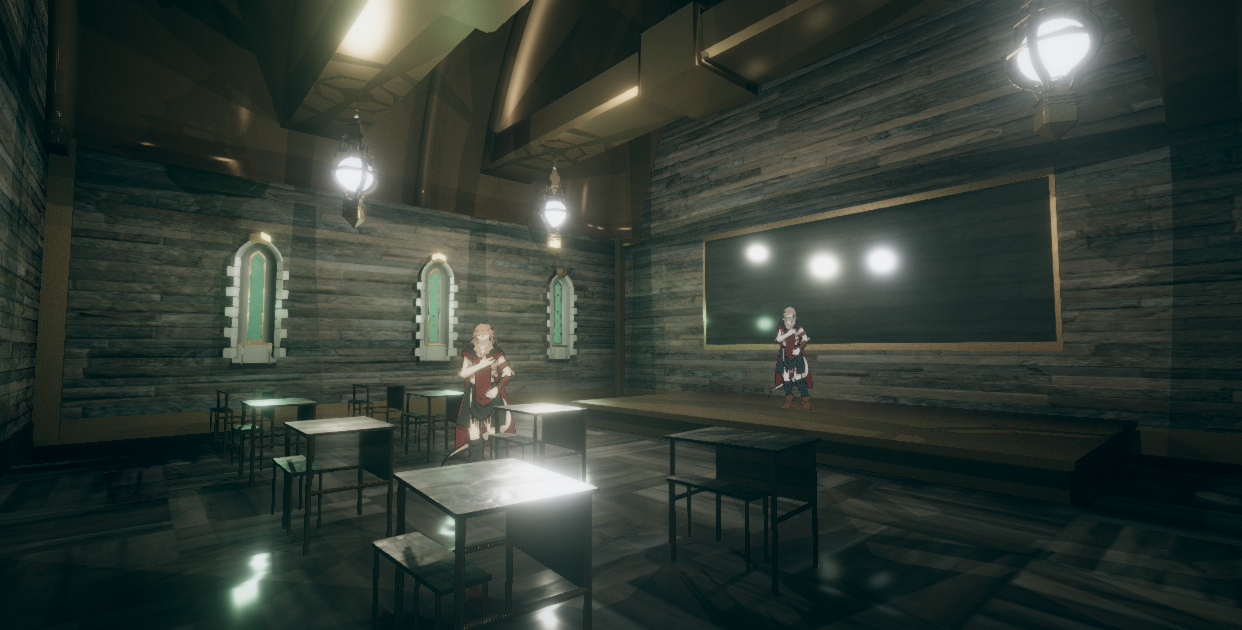 ... and also time for more Lizards for Scale. What? It's a factual statement!

It's important to bring back your scale references when you're plunking stuff down for your scenes. You want it to 'feel right' and to get there it's usually best to just grab someone and slap them down next to a thing and then go 'does that look about right' in your head.

Note: no shot of my making those tables and such in Blender. You don't need to use a complex tool to accomplish a simple task: that's how I run my scenework. All of those desks are just squished cubes and squashed cylinders.

Now you don't want everything in your scene to look uncomplicated, but it can save you a bunch of time if you just call a spade a spade and instead of booting up Blender going 'I can make a chalkboard. It's just a long cube that's really narrow and squashed' you just hit that 'add to scene' button in the Hierarchy panel and go 'Cube' and then say to the cube 'squash, stretch, and thin'.

Once you've finished your "Rough Scene Layout" with your lighting and materials set up, it's time to stare at it a bit. Flip it sideways. Get up from your chair, step back a few feet, and stare at it to see if something jumps out at you. A lot of things jumped out at me! Boiling my notes down, I decided to go after the following stuff:

So I took those notes and ran with them. First, I decided to whip up a decal to slap onto the Ghostboard by making an illustration in Clip Studio Paint...

... and then I 'drew the rest of the fucking owl'. Sorry for less steps being recorded here. When I've got a 'list of todos' I become a Man on a Mission and kind of zone out while doing all the stuff I need to. So, anyway, this was the result of those notes!

... and that's how you make a Classroom for GraveKeepers!

If y'all would like me to explain anything you've seen me do here, feel free to comment below! I'm willing to break stuff down if I've made it (which doesn't include the bookcase in the background, sorry; that one's a free resource by another author. Everything else in the scene is mine though!)

And if you like what you see here and would like to see more, consider checking the game's page out! https://firgof.itch.io/gravekeeper-academy

Or if you'd like to talk with the GKA community, here's the public discord! https://discord.gg/VqP3vDj

Thanks so much for reading, everyone, and I wish all your projects well!

- Firgof, Curator of The Forgotten Workshop